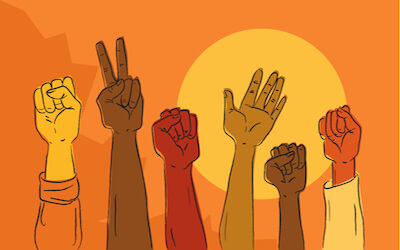 There’s been a sense of urgency and quiet desperation in the air these past few days. People are sitting on pins and needles holding their breath, praying for a hopeful turn out regarding the election. I’m writing this without the foresight of who has won the election, nor do I care. I have this nagging thought that no matter who wins or loses, things aren’t truly going to “go back to normal” or change at a national level if the people aren’t aware and willing to do the work that needs to be done on an individual level first.

This morning I felt the desire to scroll down my Instagram feed, as lately I have felt withdrawn. For weeks my timeline has been inundated with voting propaganda, celebrity endorsements, Biden memes, etc. and the whole thing is a turn-off. Because even if Biden wins and Trump is no longer in power, realistically it’s going to take some serious time to uproot the entanglement America finds herself in with racism and economic disparity. As I was idly scrolling, I came across the feed of @theshelahmarie who posted about Eddie Glaude who is an American Academic and the James S. McDonnell Distinguished University Professor of African American Studies at Princeton University. What he said in this interview was profound.

To paraphrase, Glaude said that America is not unique in its sins. It has this willful ignorance that protects our innocence. He blew my mind when he relayed the fact that the Tea Party wasn’t about economic populism, but about demographic shifts. They were upset about becoming a minority, so they raised hell. That sounds much like alt-right groups today, huh? Glaude continued to say racism is the ugly underbelly of this country and the country has been playing politics on this hatred. “It’s easy for us to place Pittsburg, Charlottesville, and El Paso on Donald Trump’s shoulders.” He hit the nail on the head for me, when he said that Trump is a manifestation of the ugliness that’s in us. I will take it further and dare to say he is a manifestation of karma we’ve had coming as a nation and if we don’t change things now, this will happen again and again. A never-ending cycle of hatred. You may agree to disagree, but simply put, Glaude said “This is us.”

That statement alone shook me because it was jarring and controversial, and it causes a need for self-introspection as well as introspection of the collective. What was our role in all this? Did we educate ourselves enough? Did we fight enough? Did we sage before we left the house, or offer up thanks before our feet even hit the floor? And where do we go from here? I feel like we’re recovering ground in our search for truth amid all this fear-mongering and blatant propaganda. The collective is feeling the pain from the loss of loved ones, rage from the lack of justice, and fear of the unknown. The possibility of things being left open-ended can weigh on the collective consciousness, so do your part and check-in with yourself and make sure your mental and spiritual health is up to par, then check on your friends and family to offer support where you can. Support your local Black-owned businesses to generate circulation of wealth within your community. Support Black-owned businesses in general. The floor has opened to mental, spiritual, emotional, and political questions. Your voice and opinions matter, so keep the conversations going and remain open to understand others. There is as much space to disagree amicably as there is to agree. We have to set the standard and remain firm because it starts, is maintained, and ended with us people. We’ve made it this far together, and if we continue to lay the foundation and build one another up, we will thrive.