Devil’s Tower National Monument is a strange aberration, rising almost 1300 feet above the surrounding prairie. It’s a sacred place for several native cultures, but, outside of tourist season, prairie dogs and pronghorn antelope are more common than people in this windy and open landscape. 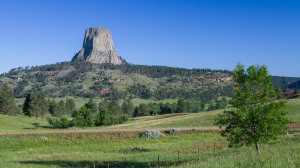 Devil’s Tower is also a destination for rock climbers. And when you rock climb there, you better prepare to talk to the tourists. They usually notice that you’re carrying ropes and other climbing paraphernalia and some even ask you if you’re a rock climber. But most assume because you’ve got the gear that you are a climber and they almost always ask some variant of these three questions:

Unlike mountaineering, getting to the top is almost never the point for a rock climber, because there are almost always others ways of getting to the top. Sometimes it’s as simple as walking up the backside of a cliff on an easy trail. Sometimes you actually start at the top of a cliff and lower yourself down to the bottom so you can climb back up.

With Devil’s Tower, there’s no easy backside trail, but a rock climber doesn’t go there to get to the top. In fact, when you do get to the top, you enjoy the view for a few minutes, but usually for far less time than it took to get there. Instead, you go to Devil’s tower for the unique quality and size of the routes. 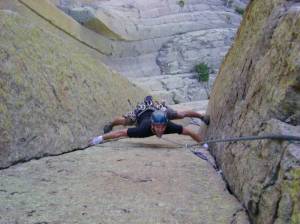 Climbers like rock in ways that other people don’t. They speak of rock features in an entire specialized language – arêtes, dihedrals, faces, cracks, and specialized subcategories of each. Rock can be slick or friable; cracks incipient; handholds and footholds solid; routes have cruxes. Geometry and shapes are seen on rock walls, like glacial clouds. Devil’s Tower rock has cracks, grooves, and straight-sided chimneys that are rare elsewhere.

So the point of rock climbing is in the pleasure of seeing and touching rock up close and, more importantly, from moving over it. When all is right in your climbing world, you move fluidly over rock, feeling the exhilaration of a well-functioning body and mind. You feel confident and competent and ready for whatever comes next.

When all is right, there is no need for the 200-foot ropes and other gear that climbers use. The gear is there to protect you in case you fall, for those days when the holds feel small and tenuous and your body feels weak and incapable. You hope never to need the gear, but you bring it because you know you’re human and you know that there are bad days – and bad days, too, contain the satisfaction of safely negotiating your vulnerability.

Rock climbing is about deciding how you will get to the top and staying true to your intention. Or if you fail that day, it’s about coming back another day and trying again. It’s as much about about process as product. Getting to the top is nice, but getting to the top with integrity and grace is a transcendent and transformative experience.

It’s hard to talk about transcendence and transformation. It sounds mystical and a long way from carabiners, pitons, and clinging to nubs of rock as you struggle up parts of a 1300-foot wall. So, when tourists at Devil’s Tower ask their questions, you try to smile and answer with the same integrity and grace with which you attempt to climb. Sometimes you fail. But there’s always tomorrow to try again.

I make some mean pancakes. View all posts by halshop